It’s now 4pm. It’s been 4 hours since I’ve started the oxytocin. I was told that after 9 counts – I should be in full fledged labour. SPOILER ALERT: I ended up with 92 counts by the end.

Whatever I was experiencing, was manageable. My brothers and sisters in law came by. They brought food – I had some soup and snuck in a bite of a bagel. No solids allowed when you’re on oxytocin due to the threat of choking – or something like that.

After finishing my soup, Allison (my midwife) comes and stands over my bed and says the following words. “I need to check how dilated you are. And I can’t take no for an answer.” I agree but didn’t completely understand what I was saying yes to. I don’t think I need to go into details here but basically my cervix is to the left and to find it was a mission. That procedure was so painful that I literally have never heard myself scream like that – EVER.

“Zero” she says. ZERO?? It’s been 31 hours since my water broke and I haven’t dilated at all? I was baffled. They turned up the oxytocin.

My husband eating his slice of pizza, while I starve.

Another 4 hours pass and a doctor who was on the floor came to speak with me. My midwives knew I was stubborn and needed reenforcement. She announced that she needed to check me and it was going to be “less pretty” this time but to just breathe through it. Ok. I’ve been breathing through everything so far – this should be a piece of cake. NO. IT WAS NOT. Once they were done, I was crying uncontrollably and couldn’t catch my breath. Once calming me down, they proceeded to tell me that they were manually stretching me and I was now 1 cm dilated. I wanted to die. I simply couldn’t tolerate the pain of that procedure another 9 times to reach 10cm. I just couldn’t. Either way- the doctor and Allison kept me hopeful and said the next check will be around 11pm and they’ll reassess the oxytocin then as I had taken in more than the recommended amount.

My contractions were now getting stronger and I was going into something called “back labour.” This is basically when the contraction starts from your back and debilitates you in a way you can never imagine. I cried through another session of stretching at 11pm where I had reached 1.5 cm. They took me off the oxytocin and requested I walk around. I was so weak. It had been 12 hours and all I downed was some soup and water. Within half an hour, they started me on a new dosage of oxytocin and things really started rolling. My contractions were getting stronger and I really had no breaks between them. They went from mildly wild to unbearable. No minutes in between to rest. No chance to breathe. Nada. The doctor kept coming in every few hours to continue stretching, in which by 5am, I had reached 2cm.

By the early morning hours, I was exhausted. I got no sleep. Contractions were intense and the stress of not dilating was eating at me. I was begging for the epidural but the team wouldn’t allow it due to the amount of oxytocin I had taken in. They didn’t want to reverse its effects. Around 7am, a new doctor walked in (shift change) to discuss the updates. It was that conversation in which the possibility of a c-section was introduced.

C-section. My worst nightmare. Everything I had done in my pregnancy, the decision I made to get a midwife (significantly lower rate of c section with midwives), or efforts of lowering the baby pre delivery, my birth plan, etc., was all simply to AVOID a c-section.

The doctors wanted to give me a chance. They wanted me to reach 10cm on my own so that I could deliver naturally. They were so incredibly supportive and literally saw the fear in my soul when the possibility of the operation came up.

10am rolls around and at this point, I can’t get a grip. Everything hurts even more. I’m desperate. I was acting crazy. I’ve never cried so hard in my life. I was honestly hysterical and begging for an epidural, or any pain relief in general. I kept getting rejected. I hadn’t eaten, nor slept in 24 hours. My sisters in law came in and out to encourage me, help me up, go to the bathroom and just really motivate me on getting through this.

Noon. The doctor walks in and says he’s going to do another check and stretch. I’m not even kidding – I cupped his gigantic hands in my own and pleaded with him not to. He felt bad for me. I could see it in his eyes. “Sara, Sara…I need to do this. I’m sorry but I have no choice.” He was trying to calm me down. I relaxed and let him do his thing. I crelled (cry-yelled) so loud that even he was astonished. He backed up and said he wasn’t going to do it anymore. He pulled up a chair next to me and told me that I had only reached 3cm. I was heartbroken. I knew what this meant. He told the nurses to prep me for a c-section. 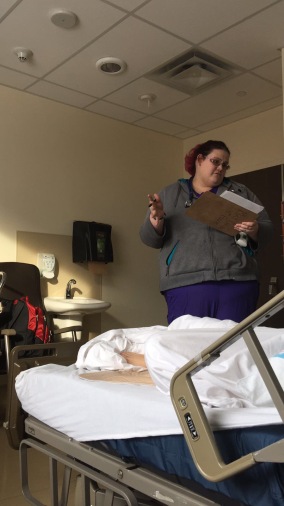 One of our favourite nurses.

At this point, I was numb. I’ve never felt so defeated in my life. Tears streamed down my face but I didn’t care how I looked in front of my family, midwife, nurses and doctor. I didn’t even notice them around me. I was in my own world and in that moment, I felt a detachment with my child. I felt resentful. It wasn’t her fault but you go through so many emotions, its really unpredictable how you will feel. The doctor said she was riding the contractions. She was enjoying the squeeze and would travel further upwards instead of lowering down.

My midwife came to me and said she would give me laughing gas until it was time to go in for the surgery. It would be a couple of hours. I laid back and took the gas. SIDE NOTE: I was so high. That gas is no joke. You can feel the pain still but it seriously takes the edge off.

At 3pm, the nurses came to wheel me into the operating room. My husband went to get suited in those coveralls and I went into this cold, morbid feeling room with just a table. I was silent. I was stuck in my thoughts. 6 weeks recovery (c-section) vs. 1 week (vaginal). How was I going to do this? An incision scar through my lower abdomen forever! I had limited help at home, so how was I going to take care of a newborn? A few of the thoughts running through my mind.

Anyways, I sat on the table and the anesthesiologist waited for my contraction to end before he did a spinal tap to numb me from chest down. I laid down and up went a huge curtain above my shoulders. In came my husband to sit next to me. I closed my eyes. Tears rolling down my cheeks. A few minutes later – I opened my eyes to see the reflection of my skin flipped over my stomach and an ish load of blood in the light above the table. I asked them to move it. They did. The doctor went on to say that the baby was a fighter and didn’t want to come out. He then annouced that she would be out in 3 minutes. I closed my eyes again and stayed quiet. I was shaking. I had no control over my body. It was like a light seizure.

I felt a lot of pressure – tugging and pulling to then hear a cry. A strong cry. I was relieved this was over. The staff took my husband to take photos and I laid there while they stitched through nine layers of skin. I was still pretty devastated. I didn’t have that moment of excitement upon her delivery. I wanted space. My midwife brought her over and put her on my face to do skin to skin. I feel guilty about it now but I don’t even remember what my initial thoughts were of when i first saw her. Her name was going to be Raaya, meaning “joy” in Malay but honestly speaking – I felt the opposite. 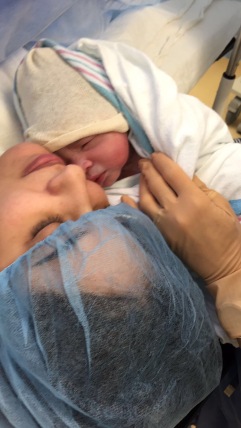 After getting stitched, they rolled me into recovery where I saw my husband skin to skin with our baby. I smiled. The sight of that made me happy. In recovery, I had to feed her right away and she latched pretty well. I was satisfied. We spent the next 2 hours in a recovery room laying chest to chest and I was slowly falling in love. She was mine. She was the one who sat in my ribs the last trimester. It was because of her, I threw up my entire pregnancy. Raaya was the reason I had such a gruelling 9 months, which surprisingly, was now was a distant memory. I would take all the aches and pains all over again to have this moment with my little family.

Right off the bat, we could tell she was patient, sweet and calm – like my mom. Her spirit was bright. Like Nooreen. My mom. That’s what her name meant – a light. We named her Raaya Nooreen, in memory of her Nani. I see so much of her in Raaya already.  My baby is only 2 months old and has taught me so much patience. I’ve never seen this kind of poise from anyone other than my own mother. 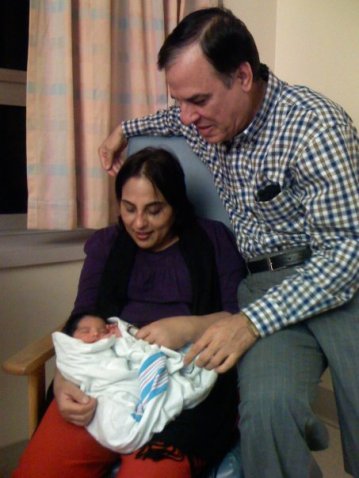 A picture of my parents with their first grandchild – Mishall. The only grandchild they got to see. I imagine that they’d be just as ecstatic to see Raaya.

God is good. I have faith in Him. And trust in Him. It’s His mercy that got me through everything I’ve endured. I wish nothing but His blessings on anyone who may be going through a similar journey. May He make it easy. =)

View all posts by sairahayatkhan →

13 thoughts on “Part 3 – My Labour and Delivery Story”